At the beginning of October 2021, Tricerat adopted a four-day work week for staff in order to help boost employee wellbeing. After 6 months, employees are thriving and each department has found benefits. Learn more about the current movement for a four-day work week in the US and how Tricerat's Support Team has maintained successful support for customers following the shift.

Will the Four-Day Work Week Become the Norm?

Workers throughout the United States have become very used to working five days a week, but more businesses are exploring a switch to a shortened work week. Though it has not officially become the norm, a California lawmaker recently introduced legislation to shorten the work week across the state to 32 hours. This change would be for all companies with 500 or more employees and employers would be required to pay staff time and a half if they went over the 32 hour limit.

Outside of new laws shortening the work week, many other companies have decided to make the shift themselves. Panasonic and Basecamp have both introduced shortened work weeks to give their employees a better work life balance and they're not alone. The 4 Day Global program kicked off at the beginning of the month wherein thousands of employees will be testing out a four-day work week over the next 6 months. With more companies and lawmakers getting involved in this shift, it wouldn't be shocking to see the four-day work week become the norm over time. 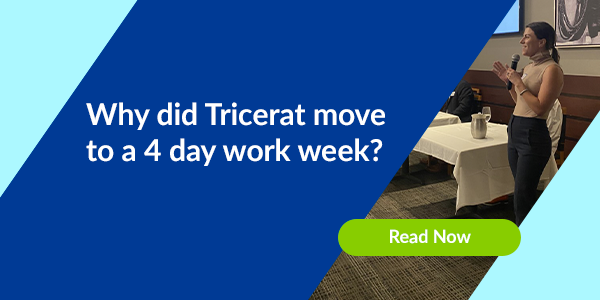 Although employees at Tricerat are working less hours than before, company efficiencies have never been better. The outstanding Support Team at Tricerat has always been a source of pride for the entire organization and a comfort to our customers. Since adopting the four-day work week, our NPS score has remained at a 100 through Q4 2021 and Q1 2022! Our Technical Support Manager Paul David had this to say about the four-day work week shift; "It's great to see our Tricerat teams enjoying their new work/life balance, while continuing to assist our clients at the highest level and maintaining our outstanding NPS score."

The teams at Tricerat have been able to communicate effectively and maintain productivity even with a shortened four-day work week. The staff has been very appreciative of their extra day off and has used it to explore hobbies, spend time with family, and much more. Paul David spends his extra day off doing chores around the house, allowing him to spend more time with his family over the weekend. When asked about his thoughts on the four-day work week Paul stated, "I love my job, I love my clients, and I love my four-day work week!"