What To Expect From Microsoft Windows Virtual Desktop

The news from the past six months about Microsoft Windows Virtual Desktops has been a hot topic in the industry. There is a lot of excitement around this product and the possibilities of a simple Platform-as-a-Service that is closely integrated with Office 365. However, other attempts at cloud-hosted desktop services have so far yet to make a large impact and some questions still remain about the place of WVD in the overall VDI and Windows application delivery picture.

Learn How Tricerat Works with WVD

Notes From a WVD Install

In this public preview, there are a decent number of steps to get a Microsoft Windows Virtual Desktop instance up and running, and there are some video walkthroughs that help augment the Microsoft walkthrough documentation. Microsoft promises to streamline this, but the current process involves a mix of PowerShell and web wizards. This includes: 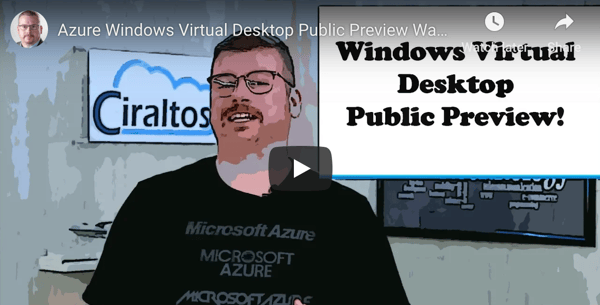 When we went through the install process, there were a couple nuances that caught us. First, our test Office 365 environment was using the basic Azure AD, and trying to add Microsoft Windows Virtual Desktops to a subnet that doesn’t have an ADDS domain server available will not work. Fortunately, Microsoft has made it relatively easy to provision the Azure Active Directory Domain Services in an Azure instance, but that does need to be done before the WVD process can succeed.

Another early issue we had was working with the service principal account. Our particular tenant is set up for MFA, so the WVD process forces you to use a service principal account instead of a UPN. Ultimately this was just a step that we missed in the Microsoft documentation, and after a few PowerShell commands, we were back in business. However, it is another example of PowerShell scripting that is required to get everything up and running.

The final error that we ran into was selecting a smaller VM template that didn’t support premium SSD disks. The interface allows a choice between SSD and HDD, and I had selected SSD. The next dialog shows all options for VM templates in Azure, regardless if they are compatible with other choices. When using SSD disks, make sure to pick a VM template that supports premium SSDs.

So far, we only have a public preview along with some comments and demos that Microsoft has provided about what is coming. Many of their announcements happened at Microsoft Ignite late last year. In the current version of the preview, there is still a lot of groundwork that needs to happen to get a WVD instance up and running, and errors along the way can be cryptic. Microsoft is planning a more straight forward on-boarding process which could really help deliver the promises of simplicity for WVD, but much of that is still yet to be seen.

Simplicity can also be a concern, as most environments will remain hybrid between cloud and on-prem or a mix of different platforms. A Microsoft PaaS offering could be great for new installs, but lack of inclusion for other platforms could be limiting for existing companies looking to leverage the cloud with a portion of their workloads. There is speculation that the VDA component of WVD could be used on other Windows 10 installs outside of Azure, but that isn’t clear now. It’s likely that environments that utilize multiple clouds and a mix of cloud and on-prem will still look to other management platforms to tie it all together.

Another limitation in this preview is the inability to use an instance of Azure Active Directory. For many enterprises this isn’t a problem, but for WVD to really achieve simple desktop deployments, it would be best to offer a solution that can be added on to a basic AAD instance. It’s likely that Microsoft will include these capability and make continuous enhancements to the overall service by the time it reaches its launch.

The innovative Windows Virtual Desktop (WVD) is interesting because it represents the possibility for an easy Platform-as-a-Service (PaaS) implementation for Windows desktops. Microsoft has bundled several of the components that are normally necessary to run an RDS environment, allowing administrators to focus on just the desktop workloads in WVD. Multi-user Windows 10 gives a full desktop experience for users and applications, and also simplifies the license needs by not requiring a Windows Server CAL.

Many companies over the last few years, including Microsoft, have made pushes for desktops running in the cloud. This promises to leverage current RDSH technologies and components, in an easy to deploy option that results in a full Windows 10 virtual desktop. Add in integration with Active Directory, Office 365, and other Azure services, and there is potential for a powerful cloud-based EUC environment.

The advantages of VDI in the cloud are not new. The technologies are already in place to deliver high-performance access to Windows applications from any device running anywhere. Supporting workers on-the-go with multiple devices is seamless. Even if the service is for office workers, administrators no longer need to build and run a datacenter since the work is all done in the cloud.

WVD could be a major shift in the VDI landscape. With so many companies already leveraging Office 365, adding on cloud desktops and applications in a simple way could be the ideal path for many SMB companies, or for startups looking to buy as a service instead of capital expenditures. All the selling points of Office 365 for the office suite of applications and back office servers are now realized in the same way for desktops. WVD rounds out the picture of Microsoft 365 being an end-to-end service offering.

Microsoft's Windows Virtual Desktop is likely to be a significant option for companies looking for an easy way to add VDI through a service offering. Tricerat Simplify Printing has a history of solving printing problems in remote access environments including the most efficient way to manage printers for users in hosted environments. Regardless of a WVD-only implementation or an application delivery strategy that spans multiple platforms, Simplify Printing can manage all user printing in a consistent and effective way, dynamically adjusting to the user, device, and location.

Get the Updates from Microsoft On Windows Virtual Desktop